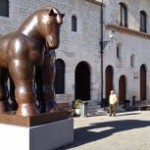 An artistic event of exceptional appeal shines in the umbria spring:

the first world’s retrospective devoted to “plaster” by Fernando Botero. 76 plaster works of the great Colombian master (the ‘negative’ of forty years ‘of sculpture), exposed until August 31 in Assisi under the fourteenth century vaulted Mount Frumentario with 39 oil paintings, while the irresistible ‘bronze ‘ horse of 1999 already patrolling the Town Square with a tremendous visual impact. Fernando Botero, who 60 years ago is thrilled at the frescoes of Giotto, was honored with his presence the opening of the exhibition, which has been concentrated on a great public contest.

Fernando Botero Angulo (born April 19, 1932) is a Colombian figurative artist. His works feature a figurative style, called by some “Boterismo”, which gives them an unmistakable identity. Botero depicts women, men, daily life, historical events and characters, milestones of art, still-life, animals and the natural world in general, with exaggerated and disproportionate volumetry, accompanied by fine details of scathing criticism, irony, humor, and ingenuity.

Self-titled “the most Colombian of Colombian artists” early on, he came to national prominence when he won the first prize at the Salón de Artistas Colombianos in 1958. Working most of the year in Paris, in the last three decades he has achieved international recognition for his paintings, drawings and sculpture, with exhibitions across the world.[1] His art is collected by major museums, corporations and private collectors.
If you enjoyed this page, please consider sharing it!