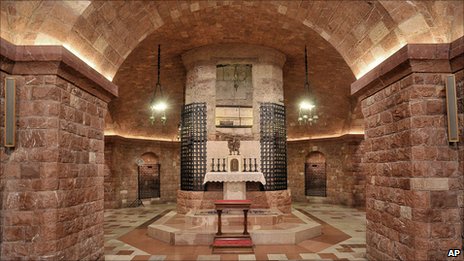 The tomb of St Francis of Assisi has reopened to the public after the first restoration in its nearly 800-year history.

St Francis was buried in the 13th-Century and became the patron saint of animals and of Italy.

St Francis of Assisi devoted his life to the poor.

The son of a wealthy cloth merchant from the Umbrian town of Assisi, he rejected his own comfortable upbringing to help those in need.

In 1224 it is said he received the stigmata, making him the first person to bear the five wounds of Christ.

The body of St Francis was placed in a bronze urn and buried in a stone crypt in his hometown.

Now for the first time, they have both undergone a restoration.

For two months expert metal polishers and stone restorers have worked day and night to renovate the tomb.

Franciscans from all over the world are due at a special mass to mark the event.